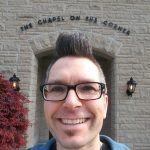 Sean Chappell, son of English immigrants, grew up in Southern Ontario and currently lives in Cambridge with his wife Kit Daven, the author of A Xiinisi Trilogy. His interest in the visual arts coalesced early and was expressed in a series of home made comic books featuring superheroes. Preferring the solitude of artistic expression over group activities Sean quickly became a strong drawer and painter with a penchant for the surreal and hyper-imaginative. He’s been mastering acrylics for twenty years and has added airbrushing / spray painting to his repertoire of techniques very recently.

His visual arts journey has led him through a twenty year history of showing in galleries both locally and internationally and winning several awards, most notably two Best in Show prizes. He has contributed illustrations twice to Amazing Stories magazine, designed movie and convention posters, music album covers and illustrated a soon to be launched tabletop card game called Honey Bomb.